Java is defined as an object oriented and multi purpose programming language. History, Usage, platforms, components and features of java.

In this era of smartphones and internet, everyone starts their day with their phone. Approx everyone use their phone just after waking up in the morning. It has become a part of our life. Earlier we had to go to the market to buy something, we had to go to the bank to withdraw or transfer money , but now we can do all these things from our mobile phones just by sitting at home. Have you thought about how we get all this information from a mobile phone - all this has been possible due to a high level programming language called java. Today we will read in detail about java programming language. 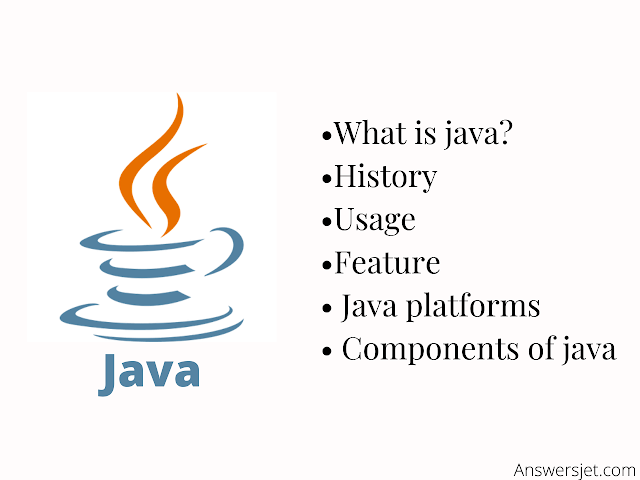 What is Java programming language?

Java is defined as an object oriented and multi purpose programming language. It is a high level, fast, secure, robust and reliable programming language which is designed to have less need for implementation dependencies. Java is also called a computer platform for application development because it has a runtime environment (JRE)and API.
A platform is a software or hardware environment in which you can run a program. Java platform has the programmer in developing and running applications of Java programming efficiently.  It is comprised of libraries, compiler and an execution engine. It is used in development of the Java applications for game consoles, data centres, laptops, cell phones, etc. d

In June 1991, James Gosling, Patrick Naughton and Mike Sheridan initiated the project of Java programming language. James Gosling is also known as the father of Java programming language. And the team of Java members is also called green team.
Java was originally for small and embedded systems in digital appliances such as television and set top boxes, etc. But later it suits internet programming and now it is used in mobile applications, enterprise applications, cards, windows applications, etc. At first James Gosling called it "Greentalk" and .gt was the file extension for it but later on the project was developed as green project's part and it was named "Oak".

The Java teams selected Oak as the name for their programming language because Oak tree represents strength. And at that time Oak tree was also selected as the national tree of various countries like USA, France, etc. But in 1995, the name Oak was replaced by "Java" because Oak technologies already had it as their trademark. Now you must be thinking by then named it Java? So here is the answer, the team come together to select new name and the suggested name in the list are like DNA, Java, silk, jolt, dynamic, revolutionary, etc. They wanted to choose something that is cool unique dynamic lively and easy to spell.

Silk and Java is the top choices of the team and as Java is unique, cool and easy to spell they decided to name it Java. In 1995, James Gosling originally released Java programming language at Sun microsystems and now it is a subsidiary of Oracle corporations. 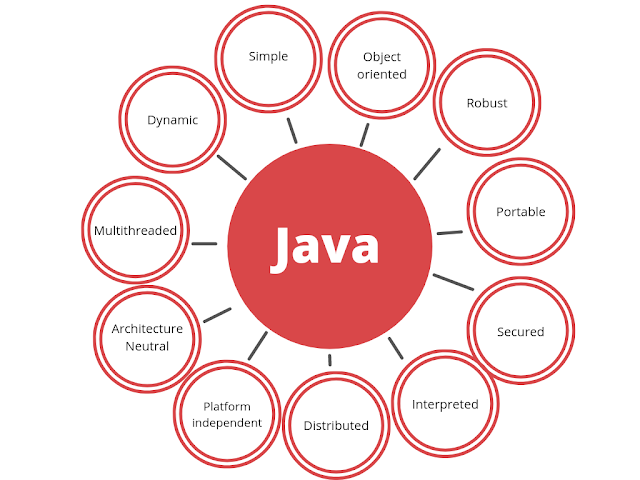 There are various features of Java programming language which are explained as follows:

The syntax of Java is very simple, clean, easy to learn and easy to understand. Syntax of Java is based on C++ it becomes easier to learn Java programming language which after learning C++. It does not include many complicated features such as operator overloading and explicit pointers, etc. Java also provides the feature of automatic garbage collector.

Java provides programmer the facility to carry the bytecode in Java to different platforms. And there is no implementation required in Java programming language.

The bytecode of Java are close to native codes that is why Java is faster than other interpreted programming languages but still Java is slow then some of the compiled languages like C, C++, etc.

Java is designed for having less requirement of implementation dependencies due to which it is architecture neutral. For example: in Java there is fixed size of primitive types.

Thread set is a separate instruction for execution of programs. Java is defined as multithreaded because at a particular time eagles with many tasks. And the advantage of of multithreading is that memory is not occupied for every thread. For web applications and multi media are very important.

It is a computer program which is used to translate high level program statement into assembly language. In other words we can say that, Java interpreter converts the bytecodes of Java into the code which can be understood by host machine.

Java is considered as a dynamic language as it supports dynamic classes loading. It also supports automatic garbage collector, dynamic compilation and function of native languages (C and C++).

There are four types of Java programming language platforms that are explained as follows:

Java enterprise edition (Java EE) is an enterprise platform which include and time and an API that are mainly used for developing web and enterprise applications. These applications are highly scalable, multi tired, large scale, reliable and secure. Servlet, web services, JPA, JSP,  EJB, etc. are the topics of Java EE.

Java micro edition (Java ME) is a platform which is used in the development of mobile applications. It includes an API and a small footprint virtual machine on small devices to run Java programming language applications.

There are three different types of components of Java programming language which are explained as follows:

Java development kit (JDK) is a software development environment that is used for developing applets and Java applications. It includes JRE and development tools which are used by the Java developers on Solaris, windows, Linux and macOS. JDK helps programmer in coding and running Java programs.
Reasons for using JDK:
• It contains a interpreter, compiler, an archiver, Java application launcher, Appleviewer, a document generator, etc.
• it consists of tools and JRE to write Java programs and for execution of these programs.
• it converts codes written in Java programming language into byte code with the help of compiler.

Java virtual Machine (JVM) is an engine or a specification which provides a runtime environment to execute the Java bytecodes or applications. JVM is also able to run programs that are written in other programming languages. JVM is available in both hardware as well as the software platforms. The main task of JVM are to load code, execute code, verify code and provide runtime environment.
Reasons for using JVM:
• For the execution of Java source code it provides a platform independent way.
• it includes numerous tools, frameworks and libraries.
• with the use of JVM you can save a lot of time.
• it consists of Just in Time (JIT) compiler which translates Java source code into low level programming language.

Java runtime environment (JRE) is a part of software which is developed to run other softwares. Java RTE is also used to express the term JRE. JRE consists of loader class, JVM and class libraries. In order to run a Java program, JRE is required.
Reasons for using JRE:
• It provides JVM, class libraries, loader class and other supporting files.
• important package classes are used in it like swing, math, lang, util, awt, etc.
• in order to run Java applets, JRE is required to be installed in the systems.

Java programming language is mainly used to create these four types of applications which are explained as follows:

Web application is an application which creates a dynamic page and runs on the side of server. At present time, technologies that are used to create web application in Java programming language are Struts, Spring, Servlet, Hibernate, JSP, JSF, etc.