Python is a powerful, easy to learn and an open source programming language. In this article we will discuss about history, why it called? Usage, etc. 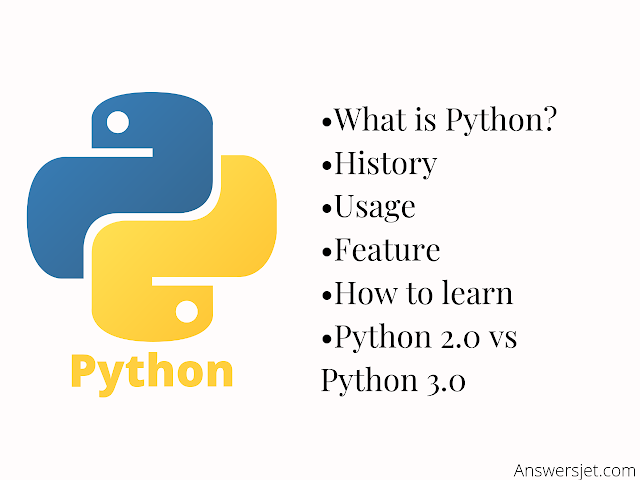 Today, through this article, we will learn whole-heartedly about python programming language.

What is python Programming language?

Python is a powerful, easy to learn and an open source Programming Language a high level general purpose programming language which means that it can be used for developing other types of software and applications besides web development. And object oriented approach of python helps the developers or programmers to write logical and clear codes for different projects.

Why it is called Python Programming language?

You might also be wondering how Python got its name. So here is the answer, Python got its name after the name of Monty Python. There is a fact behind the name of python. During the implementation of Python, Guido Van Rossum was reading the published script of famous BBC comedy series that is "Monty Python's Flying Circus". And Van Rossum wanted to choose a mysterious, sort and unique name so he decided to choose the name Python after "Monty Python's Flying Circus" comedy series for their programming language.

There are many features that makes Python famous and valuable as compared to other programming language. Here are some of the essential features of Python are listed below:

1. Easy to learn and use

Python supports the object-oriented programming language features such as inheritance, encapsulation, and polymorphism, etc. With the help of object oriented procedures programmers or developers can reuse codes and work more with less codes.

Specification of data type of the variable is not needed in Python programming language because at run time it can automatically allocates memory of the variable.

With Python, programmers can do complex tasks just by using few lines of code. Python takes only one or two lines to execute a program whereas Java or C takes multiple lines to execute same program.

Its means that programmers can use other programming languages to convert codes written in python. And it turns the program into bytecode so that any platform can make use of it.

Python is available at free of cost on its official website. Tum ek the Python module and function a large community is dedicated working across the world and anyone can contribute to the community. Python is an open-source programming language which means that everyone can download its source code without spending any money.

Python provide a wide collection of libraries for different specialities like web developer, machine, learning, and scripting, etc. There are are many libraries for machine learning like Pandas, Numpy, Tensor flow and Keras, etc. And some of the famous framework for web development of Python are flask, Django, Pyramids, etc.

Python is an interpreted programming language which means that in Python programming one line is executed at a time. And it gives the advantage of of making debug easy and portable.

It means the Python can be easily combine with other programming languages like Java, C and C++. Like Java,C and C++, Python also runs code line by line which makes debugging easier. 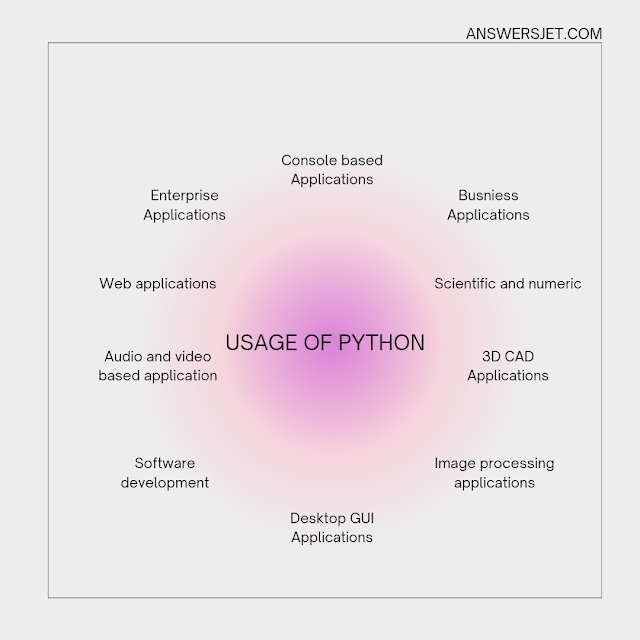 Python is a general purpose high-level and open-source programming language which has gained popularity due to its easy syntax, user-friendly environment and simplicity. And it is applicable in approx every software development domain. The uses of pythons are explained as follows:

Python is also used to create application which are used in an organisation or an enterprise. Example of some real time applications are Picalo, OpenERP, Tryton, etc.

Python is used by the programmers to develop web applications. There are various libraries available in Python to handle internet protocols like ok JSCON, request, Feedparser, beautifutSoup, HTML and XML, etc. Python provides different types of useful web frameworks such as flask and bottle, Django and Pyramid framework, etc.

As we know that GUI stands for graphical user interface which is used in the development of desktop applications. With the help of GUI, interaction become smooth of any applications. There are many GUI libraries in Python which are used to develop different user interface such as Kivy, Pyside, Tkinter, etc.

CAD stands for computer aided design and it is used to design architecture related to engineering. With the help of Fandango, HeeksCNC, AnyCAD, RCAM, etc. Python can create a 3D CAD application.

For artificial intelligence and machine learning, Python is the most suitable programming language. It provides many scientific and mathematical libraries in order to solve complex calculation such as Numpy, Scipy, Pandas, Matplotlib, and scikit-learn, etc.

9. Audio and video based applications

Python is also used in the process of software development. It is used as a support language and also used to built management and control, testing, etc. Some of the example of frameworks are: Buildbot, Apache gumps, SCons, etc.

Before learning the Python programming language, you should clear your goals. If your goal is not clear then the journey of learning Python will become dull and boring or even you won't be able to make it done with unclear objective. Before starting the journey of learning Python you should select one or two areas according to your choice. Some general areas are: games, artificial intelligence, desktop application, data analysis and processing, etc.

The basic and most important step is to learn the syntax before getting deeper into the learning Python programming language. One can easily learn its syntax in minimum period of time because it has simple syntax like English language. And after learning syntax properly further learning of python will become easier and quicker.

3. Write Code by own

Try to write down code on the paper as it is the most effective way to learn Python programming language. It will help you to get quickly familiar with the syntax of python.

One can easily learn different concept and syntax of python by making notes on their own. It will help you to focus and learn fast. It also brings stability in an individual which have them to become Python developers.

In order to learn something you should share it with others. You can share your knowledge with others through blog post, teaching them or recording videos, etc. It will increase your understanding and you can also explore your flaws.

Python 2 was invented in 2000 to process code development more easily than the older version. Python 2 received a lot of updates but when its 2.7.18 varitent was launched in March 2020, it was discontinued due to a lot of bugs.

Python 3 is released on December 2008

python 3 was launched for fixing bugs and minor problems in python 2.

Main difference between Python 2 and Python 3

• In comparison to Python 2 syntax, Python 3 syntax is very simple. Syntax of Python 2 is difficult to perceive.

• In Python 2, you need to define unicode with "u" in order to store string value of Unicode. On other hand in Python 3 Unicode is default storing of string.

• In Python 2, rules of ordering comparison are complex in comparison to Python 3.