Hey folks, Is your WhatsApp banned? If yes, then read this article completely because today we will tell you reasons behind WhatsApp banned and how to avoid whatsapp ban. 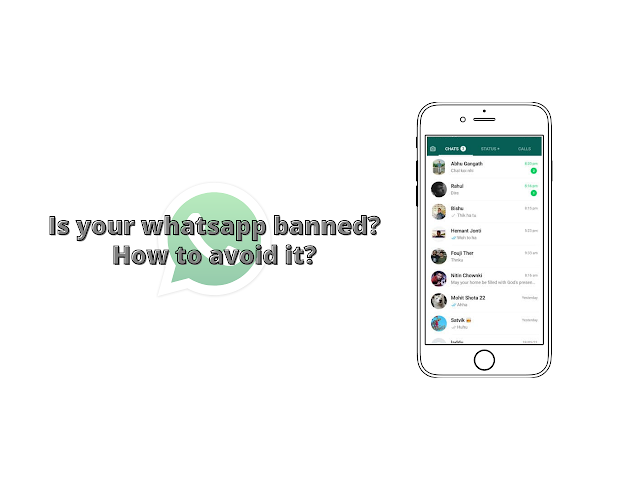 WhatsApp is a more secure platform than other messenger apps because of its end-to-end encrypted feature. If you are also a WhatsApp user, then you have to agree to its term and service, so that your WhatsApp account can't be banned. Recently, there have been many cases in which the account of WhatsApp users were banned due to their actions.

If you are also one of those users, then don't worry about it, you still have more than 90% chance to unban your WhatsApp account. Let's first look at the reasons behind WhatsApp getting banned.

7 main reasons for being banned in WhatsApp

This is the biggest reason due to which many users' WhatsApp accounts have been closed. WhatsApp has clearly written in its term and service that if a user deceives other users with illegal, hateful, offensive and threatening messages, then his account will be banned. So if you are a WhatsApp user, then you have to pay attention to this, otherwise your WhatsApp account can be banned.

• Sending virus files to other users in a confidential way

WhatsApp has prohibited sending files full of malware or hidden viruses to other users through WhatsApp.

In order to do prank with your friends on WhatsApp, some people give them a file full of malware, due to which the Victim users have to suffer the loss. For this, WhatsApp has clearly written in its term and service that if anyone is found doing this, then their WhatsApp account can be banned.

• If someone complained against you

If your behavior is not liked by any other users then they can report your account, and if WhatsApp finds that report complex, then WhatsApp has every right to ban your account.

As we know it is illegal to do piracy. If we practice piracy any content creator's videos and content through WhatsApp then, your WhatsApp account may be banned in that situation as well.

How to avoid whatsapp ban?

If you want to save your WhatsApp account from being banned, then you have to follow these following instructions;

1. Install WhatsApp only from the official app store.

2. Use WhatsApp only for conversing with your friends and family.

3. Never do any illegal work on WhatsApp.

4. Don't use offensive, and hateful words for anyone on WhatsApp.

5. Don't use WhatsApp GB, WhatsApp Plus+ and other unofficial version of whatsapp.

6. Don't send pornographic photos and videos to anyone on WhatsApp.

7. Don't unnecessarily message anyone on WhatsApp.

8.Don't slash the personal information of someone's account on whatsapp.

If your WhatsApp is banned, then you have up to 90% to unban your WhatsApp account be. It only depends on the reason of your ban whether your account will ever be unban or not. But you can still try.

• You have to send an email to the WhatsApp official email address and have to fully describe your issue.

• If you have made a mistake, then you will need to provide a written apology in that email.

• Or try to convince the person who has made a complaint against you, to withdraw that complaint.