In this article you have learnt about how to download and install Python on Windows 10 directly and step to step guide to download Python in VS Code..

Want to know "How to Download and Install Python on Windows 10" - Then this is the right place for you. Here, you will get step by step guide, through which you can easily download, install and run Python Programming language on your Windows 10. 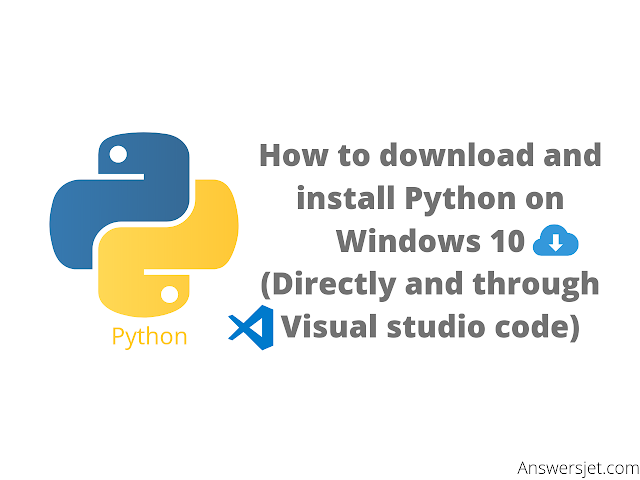 As you know that, Python is a powerful, easy to learn and open source computer programming language - which makes Python one of the most popular and fast growing Programming Language in the world.

Nowadays, every software developer is showing interest in learning and coding with Python programming language because it is easy to handle and interpret than other programming languages - where you doesn't need any compilers and can easily run python codes directly without storing codes in machine.

Come back to the original topic, let's know "how to download and install Python on Windows 10".

Here!! You can check-out all the queries related to Python Programming Language.

Basically, there are two ways to download and install python on Windows 10 operating system. The first is that you can directly download Python for PC through its website.  And secondly, if you using any IDE such as Visual Studio Code, then you can install python through Visual studio code with the help of extension feature.

You can easily download and install Python on your Windows 10 PC by following the steps given below;

1. First of all, go to any search engine and then search "Python download for windows".  After that you will be shown the official website of python on SERP. Simply, You have to visit the python website. After this, you will get a pop-up option of "Download Python latest version for windows" on the screen. Just hit the download button and download python.exe file!!!

Note: This tutorial is about Python 3.9.5 version for 64bit. You can download it according to your PC support and latest version. Rest of the setup will remain same for all versions and bit(32 or 64).

2. After downloading Python.exe file for windows, You will have to setup Python on your PC where you have to perform following task;

- Firstly Select "Install launcher for all users(recommend)" and "Add Python 3.9 to path". Then click on "Customize installation" 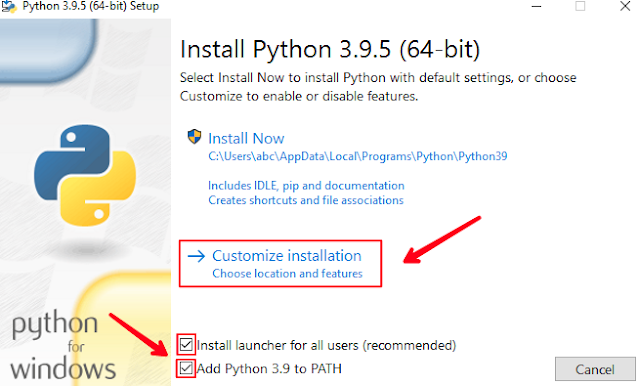 - Then you will have to Choose optional features where you must select and allow all the features including documentation, PIP, tcl/tk &idle, python test suite, py launcher and for all users(requires evevation). After allowing these features simply hit on "Next" button. 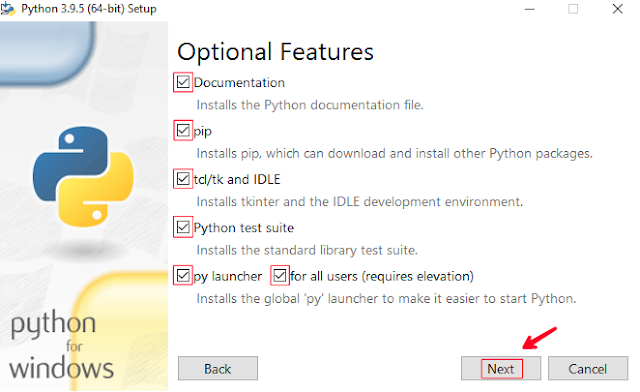 3. After the Setup of Python.exe File, you will have to choose the customized install location where your Python Files will be stored. After browse the Python file, simply tap on  "Install" button and install it. 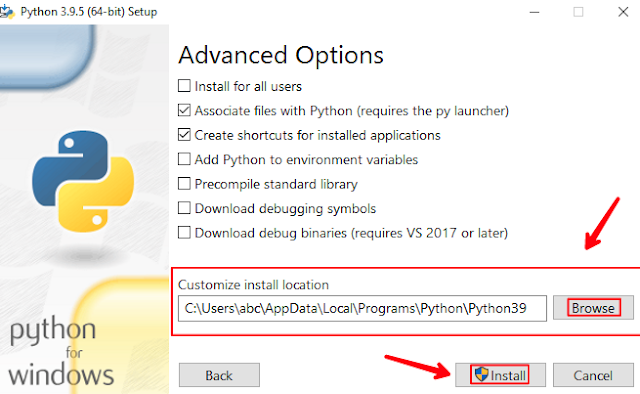 - It will take some time. After installing Python on Windows 10, you will get a Python installation confirmation popup on your screen which will look like this; 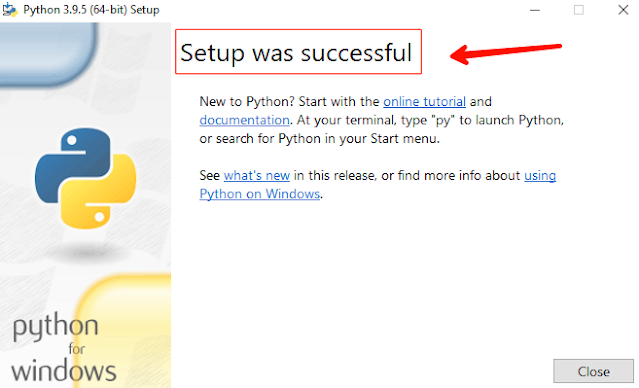 Hurrahh!!! python is successfully installed on your Windows 10 PC. Go to window's menu search box and type "Python". After this, tap on python and run Python module.

2. After downloading Visual Studio Code, install VS code on your Windows PC. After installing visual studio code, open it. 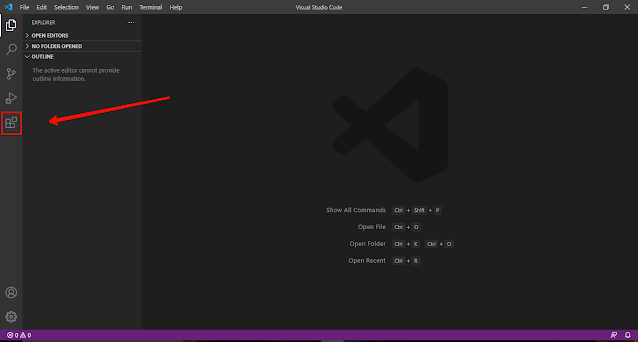 3. After opening VS code, you have to go to its "Extension Market" and search for python. 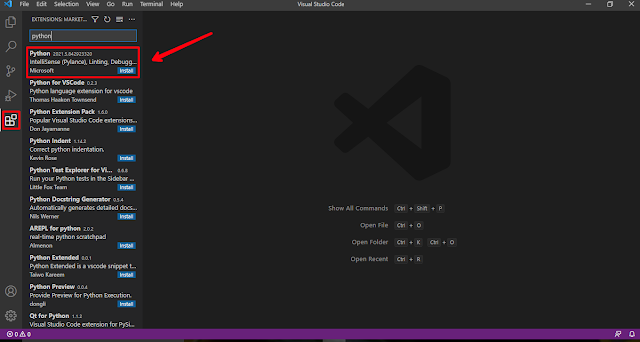 After searching Python, you will get to see many extensions.  All you have to do is click on the extension of "Python Microsoft" and install Python on Visual studio Code. 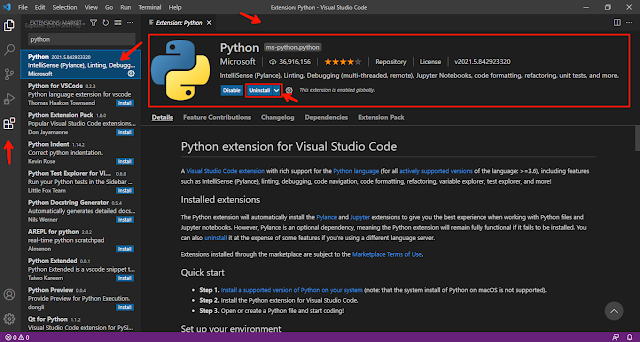 Once again Huraahhhhh!!!  Python is successfully installed on Windows10 through Visual Studio Code (VS Code). Now you can easily start Coding with Python Programming language. - But before that, You have to confirm whether Python is installed on Visual studio code or not. Simply Go to "Run and debug" Option then type;

and start debugging. If Python is installed, then you will see "Hello world" is successfully print on terminal module. 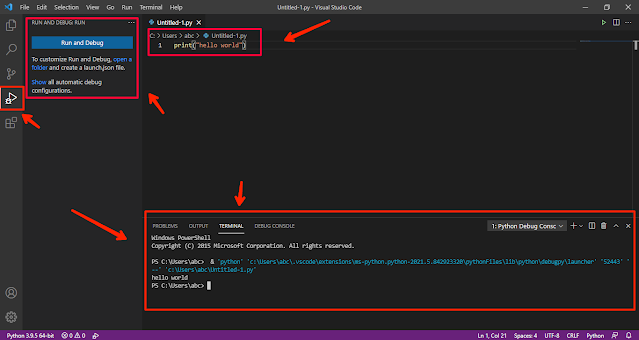