If you are also thinking about getting the best OS, then today I will tell you about the best OS for gamers in Phones and PCs.

Do you want to know the best OS for gamers? 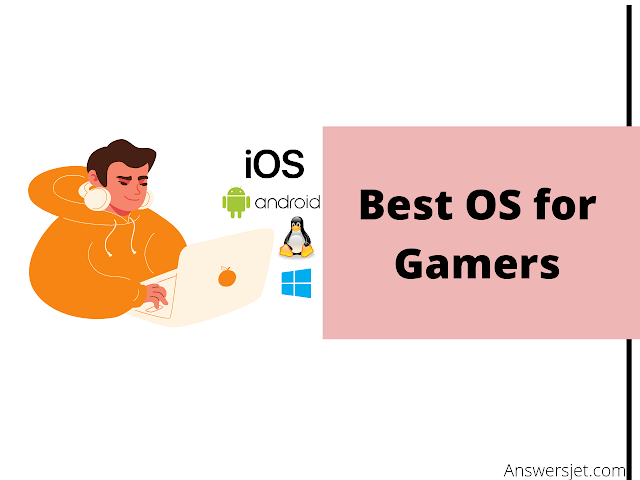 As we know, there has been a lot of growth in the esports industry in a few years. Earlier gamers used to play only as Hobby but now it has been changed. Most of the gamers have made it their career. There is a lot of craze of PUBG and other high graphics games in the entire world. But the OS of some people's device is not so good due to which they are not able to enjoy gaming. Later they think about updating their OS but they do not know which one is best OS for gamers. If you are also thinking about getting the best OS, then today I will tell you about the best OS for gamers in Phones and PCs.

Windows OS was created in 1990 by the company Microsoft in which they launched Window 3.0. In a while, Windows has made a lot of updates. Recently, Microsoft Windows has rolled out its latest update i.e., Windows 10. If you are a PC user and you are thinking of getting a good operating system for gaming, then Windows OS will be best for you because it is faster than other OS and it is also easy to use. Buying windows OS will cost you around $140.

Linux will be good option if you want to select best OS for gamers. Linux is an open source software that makes it available for free. Linux was initially launched on 17 September 1991 by Linus Torvalds, Feral Interactive and Free Software Community. This operating system is based on the linux kernel. If you are thinking of getting an free OS for gaming, then Linux OS may be the best OS for you, but its performance is less than that of Windows but it is more secure than Windows.

You must have heard about Apple, it is the most expensive and more demandable product in the world. macOS was launched by Apple in 2001. macOS coding is more advanced than the rest of the operating system, but it lags behind in the race of gaming . You can use macOS for gaming, but if you are an advanced level gamer, then you i will recommend you to choose Windows operating system than macOS. MacOS is also good OS for gamers but it not better than other available options.

TIP: If you are thinking of getting the best OS for gamers for computer then in terms of performace I would recommend you to take Windows 10.

So above we have listed the best OS for gaming on the computer. Now we will discuss about the best gaming operating system in the phone devices.

If you are using smartphone then you must have heard about Android OS. Nevertheless, I would like to give you a little information about it. Android is a mobile operating system built by modifying linux kernel. Android was launched by Google in 2008. Today's most of smartphones are running on this operating system. If you are a gamer and you want to get the best OS support then Android OS will be best for you. You will get the devices running on Android OS at a lower price. Next version of Android that is Android 12 will be released very soon which may increases gaming performance. Asus has recently launched the Asus ROG 3 gaming phone. This device also runs on Android OS system, and in this device you can enjoy gaming up to 90 frame rates.

iOS is the second best OS made for multi-tasking as well as gaming. This operating system is available only in Apple's smartphone. Apple has always been in the news due to its high price. It is more expensive than Android. ios provides best security as well as best security. Recently, iOS 14 was updated, making its performance even more smoother and it is also heard that the iPhone 13 series will also going to be launched soon. Next version of iOS that is iOS 15 will also going to be released very soon.

Above we have discussed about the best OS gamers. If you are a of playing games and want to play games smoothly or if you want to build your career in gaming then this article will provide you knowledge about best OS systems for gamers. In this we have discussed about best OS for gamers in computers and mobile devices. There are various options available in computers related to best OS such as windows, Linux and MacOS, etc. And in mobile devices there are two options available for best OS which are Android and iOS. I hope this article will be useful to you.