This article is going to be very interesting for those who loves to listen music by streaming - here you get best free music streaming app for android. 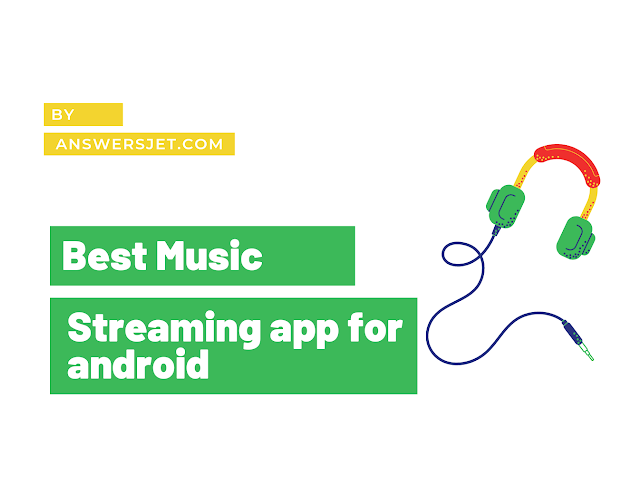 You must have noticed that the music industry has changed a lot in the last few years. Earlier people prefer to download and listen to songs, but in today's time technology has become so advanced that we are able to listen to music without even downloading it. All this has been made possible through music streaming apps.

We have listed the best and most popular music streaming app for Android which you can easily download from Google Playstore. So, let's dive 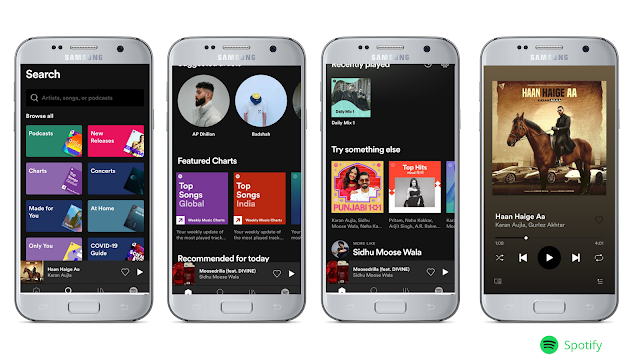 Spotify is a free music streaming app for android that allow users to listen songs online without downloading. With Spotify you can stream millions of free songs and podcasts 24/7. In Spotify, you get to see a simple and elegant interface, in which you will be able to easily listen to songs by searching any song, album or artist. Spotify support multiple languages songs including English, hindi, Punjabi, Tamil, Telugu and much more. In Spotify, you can also choose and listen songs according to your mood, genre and recent activity. You can freely listen to 50 million songs, 4 billion playlists and thousands of podcasts on Spotify but if you want to download all these then you have to take Spotify premium subscription which is also pocket friendly. Spotify is rated with 12+ on Playstore and 10 billion of people across the world have downloaded Spotify from Playstore. 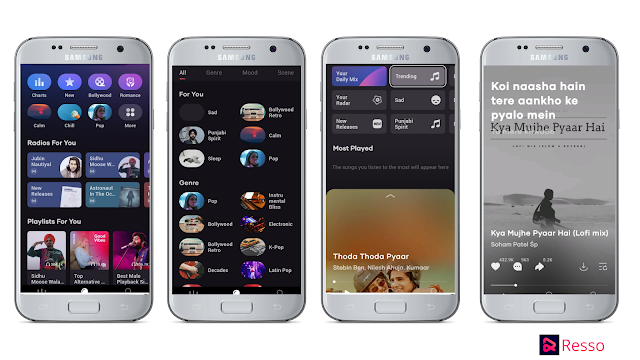 Listen to millions of songs - English, hindi, punjabi, tamil, Telugu and much more with best music streaming app for android. It is good to say that Resso has rated 12+ on Playstore and more than 5 billions of people daily stream music on resso music app. Resso is a simple and easy to use music streaming player where you can explore wide range of playlists for every mood and genre. With resso streaming app, you can listen to over 50 millions of songs. Resso supports high quality audio with synced lyrics which makes your experience good in music world. Another special feature of resso is that you can find music for every mood - which makes resso the most popular platform for music streaming. Download the resso app today and get 14 days free premium subscription including complete ads-free music, unlimited music download, audio quality 256kbs and much more. 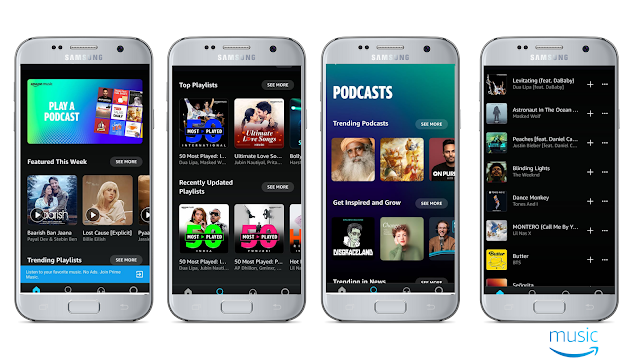 Amazon Mobile LLC launched a music streaming app for Android in 2018 after the success of the Prime Video concept. Amazon Music get rated 12+ on Playstore and more than 1 billions people worldwide daily stream music with Amazon Music app. With amazon music you can easily find and play 70 million ad free songs. Amazon is one of those few music streaming apps that will give you a great music experience.

In amazon music you get to see prime features such as millions of podcasts, Ad free music, offline download and unlimited music skips. Apart from this, you get to see a hands-free music player in the Amazon Music app, through which you can play the song by saying the lyrics of the song. 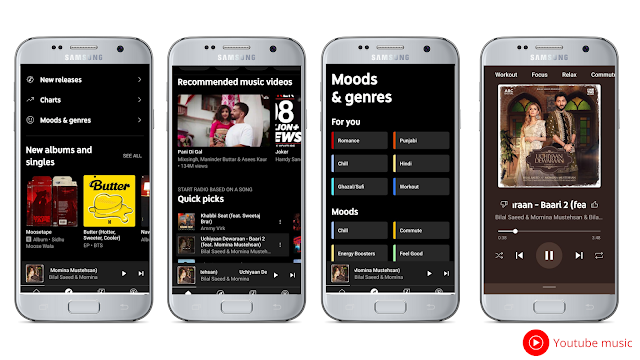 YouTube music is an another best music streaming app for android which connects you with the world of music. YouTube Music is formally like YouTube Videos which gives you a great music listening experience. With YouTube Music streaming app you can browse 70+ millions of official songs and thousands of playlists of different genres. Checkout best, latest and trending tracks with YouTube Music app. YouTube ensures you to discover music according to new releasing mix, genre and your mood. You get to see many features in the youtube music streaming app such as music lyrics, switch seamlessly between audio and video, multiple devices compatibility and much more for just $9.99 USD per month.

If we talk about its rating then it has got a rating of more than 12 and in terms of popularity, more than 10 billion people across the world have downloaded YouTube Music streaming app. 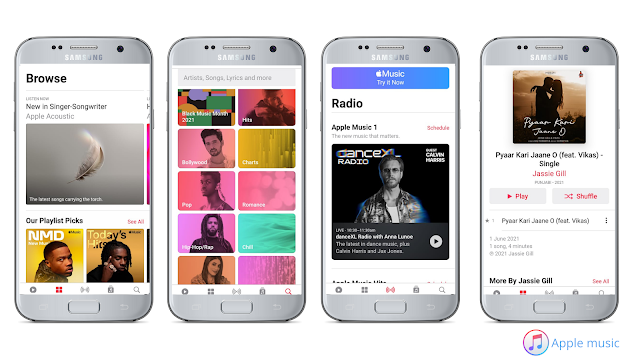 Apple music is an another best music streaming app for android and iOS. Here, you will get a wide range of songs, albums and artists. It provides the feature of 24/7 live radio and you can also search songs by lyrics. In Apple music app, you get to see a wide range of songs upto 75 million. And along with this, you can also follow playlists shared by your friends, by creating an account on Apple music app. You can listen to your favourite songs ad free in Apple music app by spending just $9.99 per month. Apple music have different types of plans like family plan, student plan, etc. So, you can choose according to your requirements. In terms of downloads, more than 50 million people have downloaded it across the world and if we talk about its rating, then Apple music has rated 12+ in google playstore. 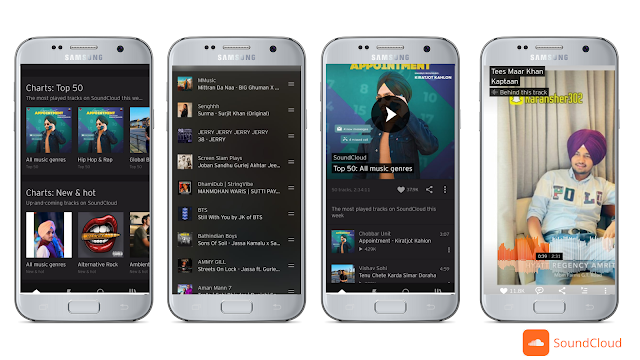 SoundCloud is an another most popular music streaming app for android. In SoundCloud you can easily connect with you favourite artists and djs. The biggest advantage of SoundCloud is that its user can easily upload their own songs in it. And along with this, you can easily save your favourite tracks, make your own playlists and discover new songs easily. It also provide many other features like curated playlists, stations, etc. On SoundCloud you get to see a wide range of artists, djs and podcasts. SoundCloud is the first app which provides more than 200 million songs and a community of more than 20 million artists. SoundCloud is available in both free and paid versions. The paid version of SoundCloud i.e. SoundCloud Go, includes additional features and it will cost you around $9.99 per month. If we talk about its popularity, then more than 100 million people have downloaded it and in terms of rating, it has rated 12+ in Google Playstore. 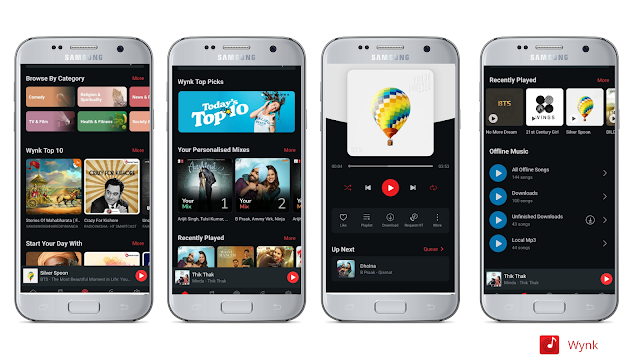 In Wynk Music app you get to watch hd music streaming supports, live streaming of music concert, best audio podcasts, radio, synced lyrics and much more which makes wynk music app the best music streaming app for android. It is good to say that more than 1 billion people have download wynk music from Playstore and it has rated for 3+ in google playstore. 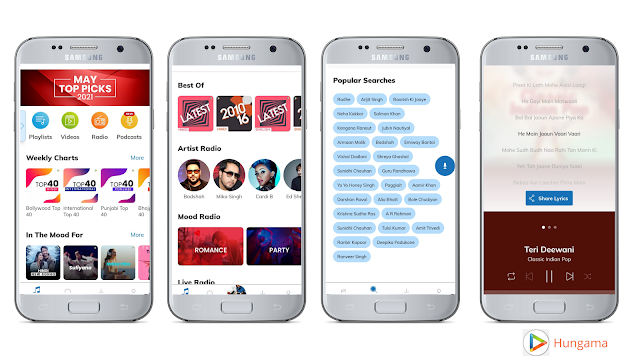 Hungama is a free music streaming app for android where you can listen and download songs in English, Hindi, Punjabi, Tamil and Telugu. Hungama Music app offers you to stream your favourite artists, songs, music videos and playlists all in one place. Hungama app contains library of 1 billion songs and music videos that will never let you get bored. Explore free Music experience with Hungama app including EDM, hip-hop, Trances, instrumentals, disco, jazz, party like, punjabi bhangra songs, late 90s, bhajans, devotion, romantic, sad songs and much more. Hungama Music streaming app also offers live radio and on-demand curated channels. The Hungama app also gives you coins for listening songs, which you can redeem later and get any gifts of your choice - so listen, earn & redeem with Hungama rewards. Apart from this, you also get to see dynamic lyrics synced feature in it, through which you can sing along with dynamic lyrics. 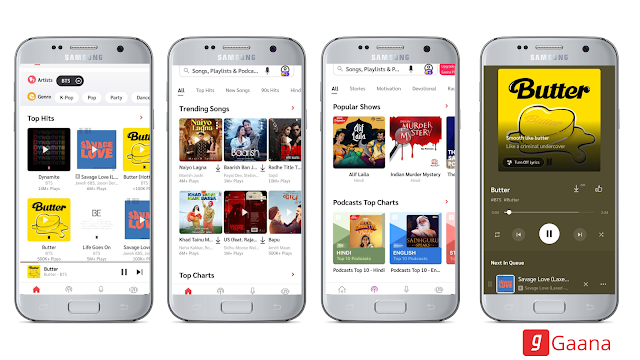 Gaana is the one-stop music streaming app for android which offers you free, unlimited online music access to all songs of different languages including English, hindi, punjabi, bhojpuri, haryanvi, tamil, Telugu and much more. Explore and listen old & new songs depending on your mood for absolutely free!!

Gaana app offers over 45 millions of High quality music streaming, Thousands of curated playlists created by experts, 30+ radio stations, podcasts and shows. Ganna app has rated 12+ on Playstore and more than 1 billions of people have downloaded gaana app from Playstore. 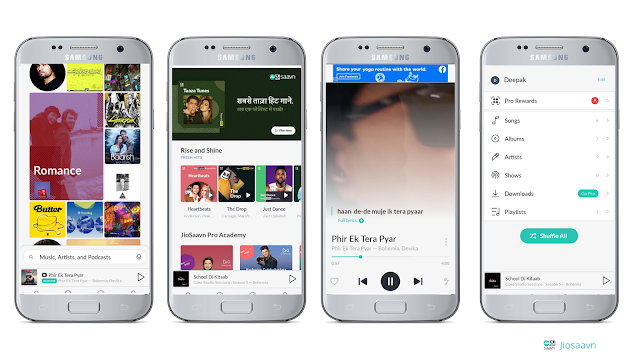 JioSaavn is best way to stream free millions of songs, podcasts and radio stations. It is good to say that more than 1 Billion people have downloaded jiosaavn app from Playstore. This app is originated from the collaboration of jio music and Saavn music app. Jiosaavn is one of the most popular music streaming app for android where you can listen free English, hindi, tamil, Telugu songs in one place. You can access jiosaavn app on your Android auto, Alexa, chromocast, Google home, Airplay, etc. JioSaavn streaming app provides smart personalised recommendations according to your mood and taste. Apart from this, you get to see free unlimited music, jiotunes, expertly curated playlists, synced lyrics, original shows and podcasts in the jiosaavn app.